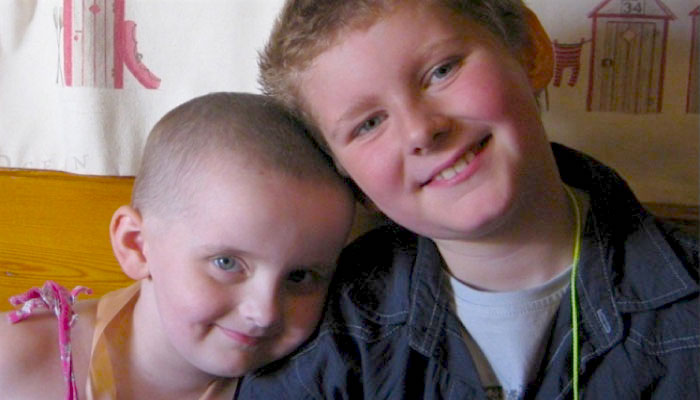 Meet Connor and Charlotte.
Connor is eight and the most empathetic and caring little boy in the world.

Charlotte is six and is the toughest little warrior you’ll ever meet. She is in the process of battling cancer for the second time in her short life but you’d be hard pressed to know.

She has a – ready now? – Nasopharangeal Rhabdomyosarcoma! This is a tumour right up high at the back of her nose. It has returned in the same place but much more wide spread making it inoperable and probably terminal.

Her treatment of chemo and radio therapy is aggressive and draining, so life has become a treadmill of hospital and home (with occasional school visits). Many of her hobbies are out of bounds because she has a feeding peg into her stomach and a hickman or central line in her chest giving access to her veins.

All the more amazing than that she is overall a happy and bubbly little girl.

Making plans for holidays is an impossible task, obviously she can’t leave the country on treatment, but more of an obstacle is the unpredictability of her general health and the availability of required nursing and hospital support where we look to go. Not to mention the costs involved when we as parents have had to take time off to care for her.

This is where the THHN came to the rescue, by offering us a short notice, free holiday we could take both children out of their daily grind and make them smile, while making memories that myself, my husband and especially Connor can treasure for a lifetime.

Just the accommodation would have been enough, but with the goodwill and kindness of those involved our week was transformed into a fun packed, treat filled extra special experience.

There are so many people to thank and mention, most notably:

Luke Tillen, the founder and apparently the power house behind the whole network, our own contact with him made it clear how much he cares about us and what is provided to us. It is people like him that lead by example and sow the seeds of community spirit and charity that makes us all better people.

Equally John and Angela owners of the Vomero apartments where we were so warmly welcomed, they have a beautiful house and gardens which they so generously shared with us. Angela claimed ‘its nothing really’ but rest assured it was anything but, with access to ‘the kids zone’ in the basement, internet in the lobby and games shed in the garden, Charlotte and Connor could have happily filled their days without ever leaving the premises! We were content to explore the wealth of hidey holes in the garden and amazing period features and stained glass in the house. Being allowed to stay on an extra day was also so kind and much appreciated. Also there to greet us on arrival were hampers from:

Luscombe Butchers of Totnes, who gave us enough meat for a meal each and every evening.

Bristol Fruit Sales, who added the fruit and veg to sustain us all week!

These were unexpected and generous and made me cry, (not my best look).

But we did venture out, we were there for the last week of September heat wave! and spent the afternoons making the most of the attractions and services in the network, doing things that many we simply couldn’t have afforded otherwise right now.

The Babbacombe Cliff Railway, so enjoyed, by charlotte in particular, we used it twice, the second occasion on Saturday at the height of the heat to spend time on Oddicombe beach, knee deep in the sea, something she’s not really allowed to do (don’t tell her consultant) !!

The Cliff Railway Cafe with Lindsay and team, who gave us a lovely lunch, pleasant conversation AND an ice-cream. The children thought scooping their own was awesome, and neither fell in the freezer!!

The Pirate Bay Adventure Golf. Grazy golf is always a winner with our family and this one was a particularly well thought out and unusual course.

The Apollo cinema deserves special mention because even though it was a Tuesday, out of season, with no childrens films showing, the manager searched his listing and would have had a special screening for them if he could, so thank you so much for trying!!

The Hiflyer, we have long been totting up the modes of transport charlotte has experienced, and adding hot air ballon was simply stunning. I will be kind though and leave out the picture of dad, hugging a column on the ground just to take our picture!!!!!. Charlotte Connor and mum loved every second of it.

Hanburys award winning fish restaurant where we were treated to a marvellous fish and chip lunch before Mr Hanbury himself came to say hello and give charlotte a goody bag, very funny DVD and cute cap included. Yet another example of that extra step that makes such a difference.

Essential Chiropractic.As it was my (mum) birthday I accepted the offer of a fish pedicure. Miss Patel was so patient with the children when they wanted to experience it to, and gave me far longer that I believe I was due so I could chill out by myself so many thanks for that.

Bygones . We arrived very late so only got to fly around but it looks like the kind of place where you could spend hours examining each amazing object.

We spent a lovely day exploring the Torquay seafront and even though they aren’t part of the network, the shop keepers there were very friendly and welcoming.

Angels Tea Rooms on Babbacombe seafront, gave us the most delicious cream tea, and sparked a bit of a row! Which comes first the cream or the jam?? My husband and I have agreed to disagree ( but I say cream first so there)

Kents Cavern, we visited to escape the heat on Thursday and were treated to one of the most jovial welcomes of the week. Charlotte as acting tour leader setting off with the torch for the next talk spot was a highlight of her day!

We took advantage of the weather on Friday and took a boat trip around the bay, which was fascinating. We had to hand the tickets in but I believe it was Greenway ferry and pleasure cruises. Anyway we got the tickets from near the princess gardens so if I’ve misnamed the lovely gentleman who helped us I am so sorry.

On our final day in Torquay we lazed around Babbacombe seafront and had a carvery lunch at The Royal at Babbacombe which was very very tasty. Then had a drive to Cockington where we were too late for a horse drawn carriage ride, but Charlotte and Connor met and fed each of the horses and we had a long chat to the gentlemen with them, charlotte was fascinated watching the shoes being fitted.

I am fairly sure that when Luke wrote explaining the services and options open to us, he did not actually intend for us to use them all! But, and i can not stress this enough, having so many wonderful things to do and see made our holiday. When asked about their favourite things on the holiday, both children basically rattled off everything we did! So Great fun was had by all then, as they say.

Charlotte will be on daily Chemo for the next year which means that apart from the odd day trip holidays won’t be a realistic option. With this in mind we, as a family, would like to thank everyone involved with the THHN for affording us and those like us the opportunity to have a normal fun and memorable holiday.

Mark would like to say that he wishes he had the contacts and knowledge to set this scheme up where we live, since it is such an amazing scheme.