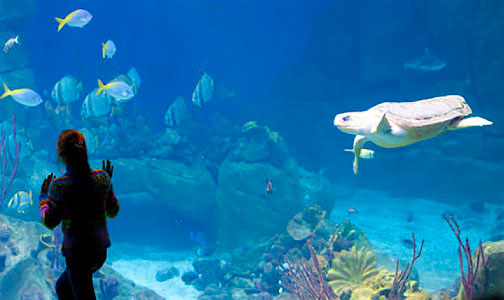 Largest public aquarium in the UK

The National Marine Aquarium was the first aquarium in the United Kingdom to be set up solely for the purpose of education, conservation and research. It remains one of Britain’s foremost aquarium with stunning exhibits and a reputation for excellence in education.

The Aquarium experience comprises a total of 50 live exhibits including three massive tanks, the largest of which Britain’s deepest tank holds 2.5 million litres of water. Over 4000 animals from 400 species are displayed in realistic habitats from local shorelines to coral reefs. In addition a new aquarium zone, Explorocean, focuses on ocean exploration and sustainability through innovative, interactive exhibits.

The National Marine Aquarium is firmly established as a source of reliable and accurate information and is a regular adviser to many newspaper, magazine, radio and television projects – the BBC’s ‘Blue Planet’ Series is perhaps the best known. Since opening, Aquarium staff have responded to thousands of enquires by letter and e-mail and have contributed to countless news stories in local and national press.