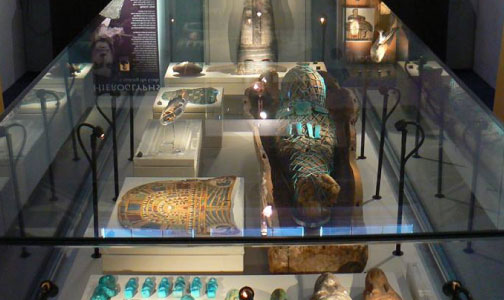 Torquay Museum is Devon´s oldest established Museum still operating. Founded in 1844 by the Torquay Natural History Society, which was renamed Torquay Museum Society in 2003, the Society celebrated its 160th birthday in 2004.

The current Museum building was begun in 1874 and within two years the building was in use. The Museum has been extended and revamped many times in its history. In 1894 the Pengelly Lecture Hall was constructed and this is still used today when it plays host to both the popular lecture series and temporary exhibitions.

In 2001 the museum secured a Heritage Lottery Grant which allowed some major structural work to be carried out including the introduction of a lift, full disabled access, the construction of a cafe, shop, and refurbishment of the entrance hall and galleries. In 2006 the museum was once again fortunate enough to secure a second grant from the Heritage Lottery Fund which allowed a major refit of Pengelly Hall, turning into a high tech lecture theatre and exhibition hall, plus the development of the exciting new Explorers Gallery on the 3rd floor of the museum.